Chayote: The Humblest of Vegetables 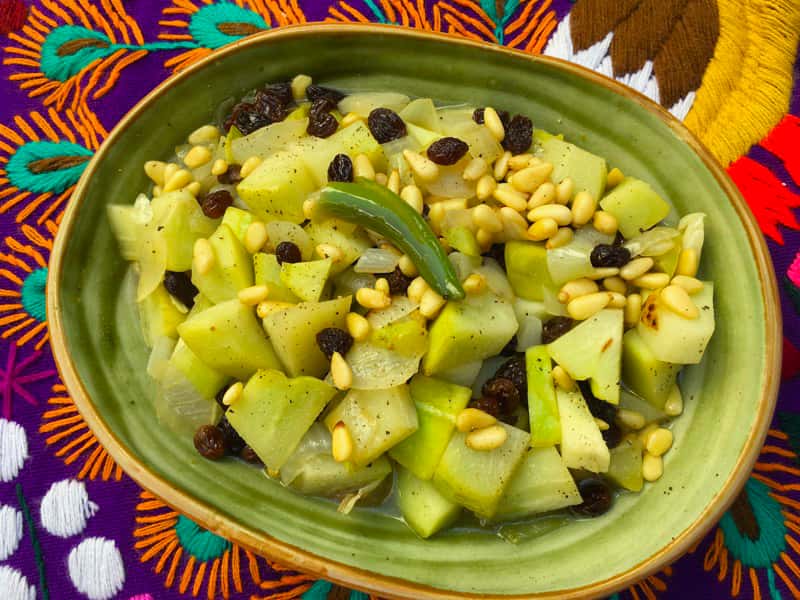 From the innumerable gifts Mexico has given to the world like flamboyant chilis, the multi-tasking avocado, the brain-stimulant called chocolate, the mood-boosting aroma of vanilla, the oft–ignored vegetable pear known as chayote hides some benefits we ought to explore.

The humblest of them all, Chayote is a healthy carbohydrate, it’s a good source of Folate and Vitamin C and amino acids which are the building blocks of protein and therefore numerous brain chemicals. Traditional medicine in Mexico uses the plant to dissolve kidney stones by drinking a tea of the leaves. Its diuretic properties also are used to reduce hypertension.

Chayote is a member of the Cucurbitaceae, or squash family, but unlike other types of squash, it has one single large seed in the center of the fruit. Its Latin name is Sechium edule and is also called mirliton, choco, or in Nahua, chayohtli. Each fruit has its own unique contours and wrinkles. Some varieties have prickly thorns on the outside of the skin and must be handled carefully with gloves.

It’s eaten raw or gently cooked and its mild flavor benefits from potent seasoning. Adding other foods to a chayote recipe brings out the best potential. Below is one of my favorite ways to cook it. To prepare chayote, it is best to peel it under cold running water as it has a sticky fluid that can temporally anesthetize your skin. Peel it as you would a cucumber and then slice in half, removing the inner seed and then slice and cut into 1-inch cubes and set aside in a bowl while you prepare the remainder of the dish.

How to get chili oil off your skin? Don’t wash!

My friend Alicia taught me this old trick to avoid the after-effects of chili oil on your hands that can in turn sting your eyes. After handling the chili do not wash your hands. It will only spread the oil. Instead rub your hands through your hair (if bald, find someone else’s hair!) the hair will absorb the oil perfectly. Then you may wash with soap and water.

Lots of user friendly ideas for use with my clients from an excellent presenter with a wealth of clinical experience. One of the best presenters ever!

– Brian F., MFT, CA
PODCAST
How Diet Can Affect Mood on Take Charge of Your Life
Listen here
SIGN UP
Receive a free guide to change your mood with food.