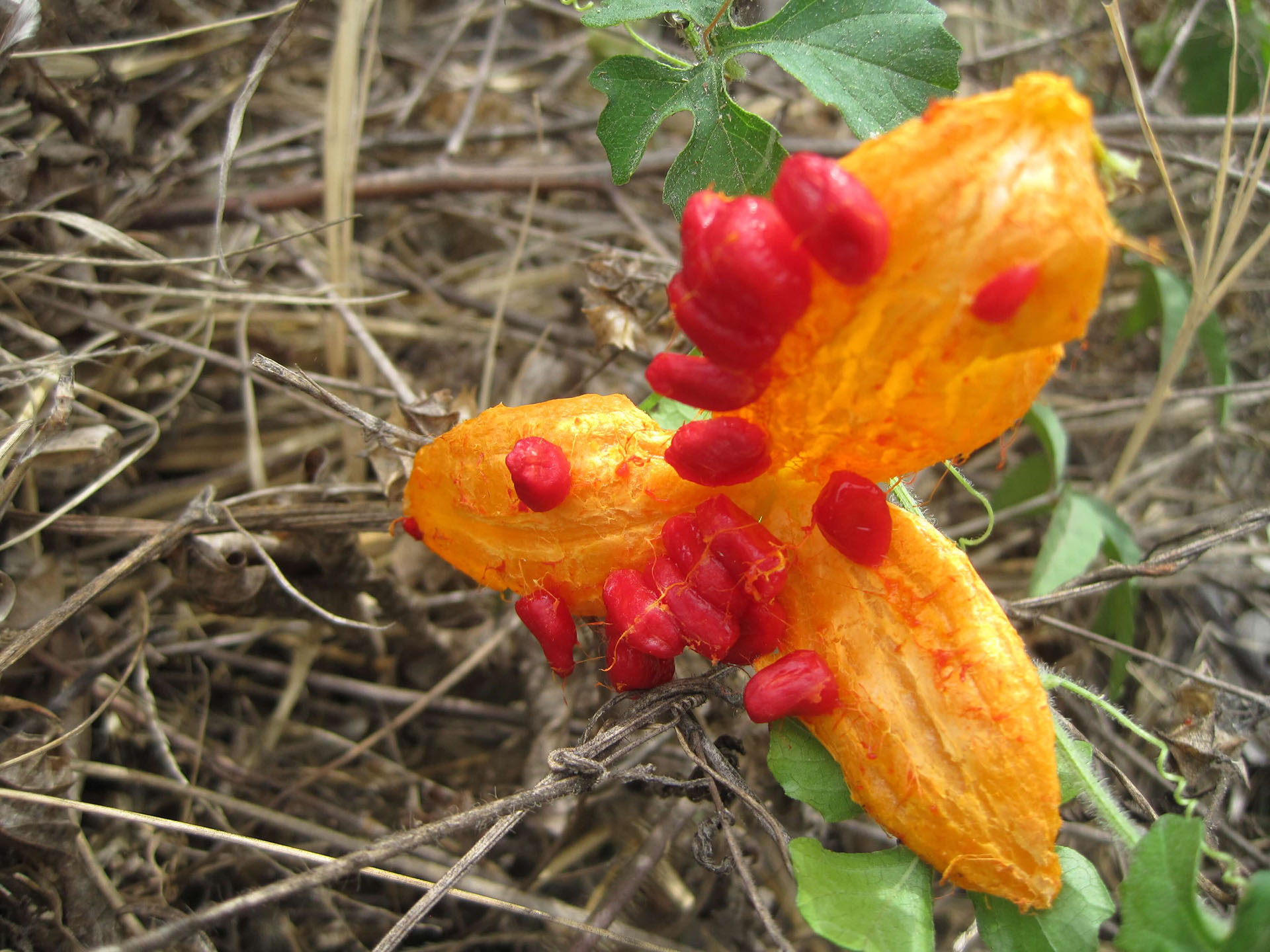 When I was a child I used to go with my parents and brother to the river or the beach a lot. Regularly, those trips involved long walks among shrublands, and even though I don’t remember when was the first time that my mom called our attention to a small orange-colored fruit, it remains a very vivid part of all my memories of those days.

My mom used to call them “papayitas” (little papayas), because they were a similar color to papaya, however their texture and form were a little different. They were wrinkled and irregular, and slightly oval. On the inside they were completely different than a papaya: they didn’t really have pulp, but they had some seeds covered on a scarlet red skin. 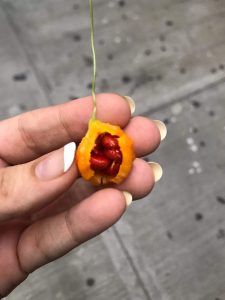 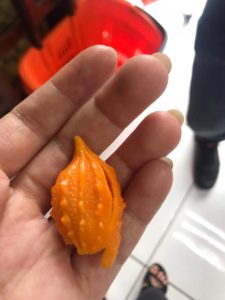 They grow on a climbing plant, around bushes, or on the fences of some overgrown wasteland. When we found them, we cut them and opened the skin to expose the inside and lick off the red pulp that covered the seeds. It was slightly sweet without being cloying, and if by accident we bit the skin we could perceive a bitter taste, that’s why we never ate it.

They always were a nice surprise on the path, and if one of us saw the plant, everyone went to harvest the papayitas. My mom used to tell us that she ate them when she found them in the wild, and that they weren’t sold anywhere.

With time, like the shrublands, these family adventures became less frequent. Slowly, the lands that were once green were bought and covered with cement, to build malls, cinemas and apartment buildings. It was more and more unusual to see a climbing plant of papayitas.

The passage of  time swept out my memories of papayitas and I rarely thought about those days. I became an adult and it wasn’t until I started working with Dr. Leslie Korn that I had my re-encounter with that fruit from my childhood.

We were working on a professional course on diabetes, and among the tons of information, I found my papayitas again!  Bitter melon. Really, I didn’t recognize it by the name but from the photos that showed one of those papayitas that my family and I used to pick up.

I was very surprised when I learned all the properties that the papayitas have and I couldn’t believe that it is highly effective to treat diabetes; to fight obesity and inflammation, and to lower levels of lipids and cholesterol.

There are several ways to consume this fruit to get the benefits. You can eat the whole fruit (no seeds) by implementing it in your daily diet, in soups, stews or different dishes. It can be taken in daily doses of 50 – 100 mil of pulp or juice. It is equally effective to prepare an aqueous decoction, adding 5 gr of fruit in 100 – 200 ml of water, in a daily drink.

For a more formal protocol, get powdered bitter melon and take between 2 and 4 gr daily for 10 weeks. Bitter melon is known to be the most successful herbal remedy for glucose control and diabetes treatment, and in several countries it is considered to be an exotic fruit. But in Mexico it grows with no need of human intervention, it can be found in shrublands, jungles and almost any land where bushes grow. Unfortunately,  it is more and more difficult to find it due to the urban development that is killing the wild spaces.

Sadly, the metropolitan growth increasingly razes the wild species that are fast being ignored or left behind. However, we can look to our ancestors, who knew these important pillars of health and gastronomy. To preserve the diversity and the tradition has become more and more urgent, and on that depends that we honor and enact our ancestral knowledge about the use of plants like bitter melon, so that they don’t die and so that we may live healthier lives.

Leslie Korn is a terrific teacher. She is able to communicate her vast knowledge to her audience in a fun and dynamic way. Her positive energy and humor in combination with her ability to articulate complex ideas make her a wonderful speaker. We were lucky to have someone of Leslie’s caliber at our conference on Alternatives to Medication for Child and Adolescent Mental Health.