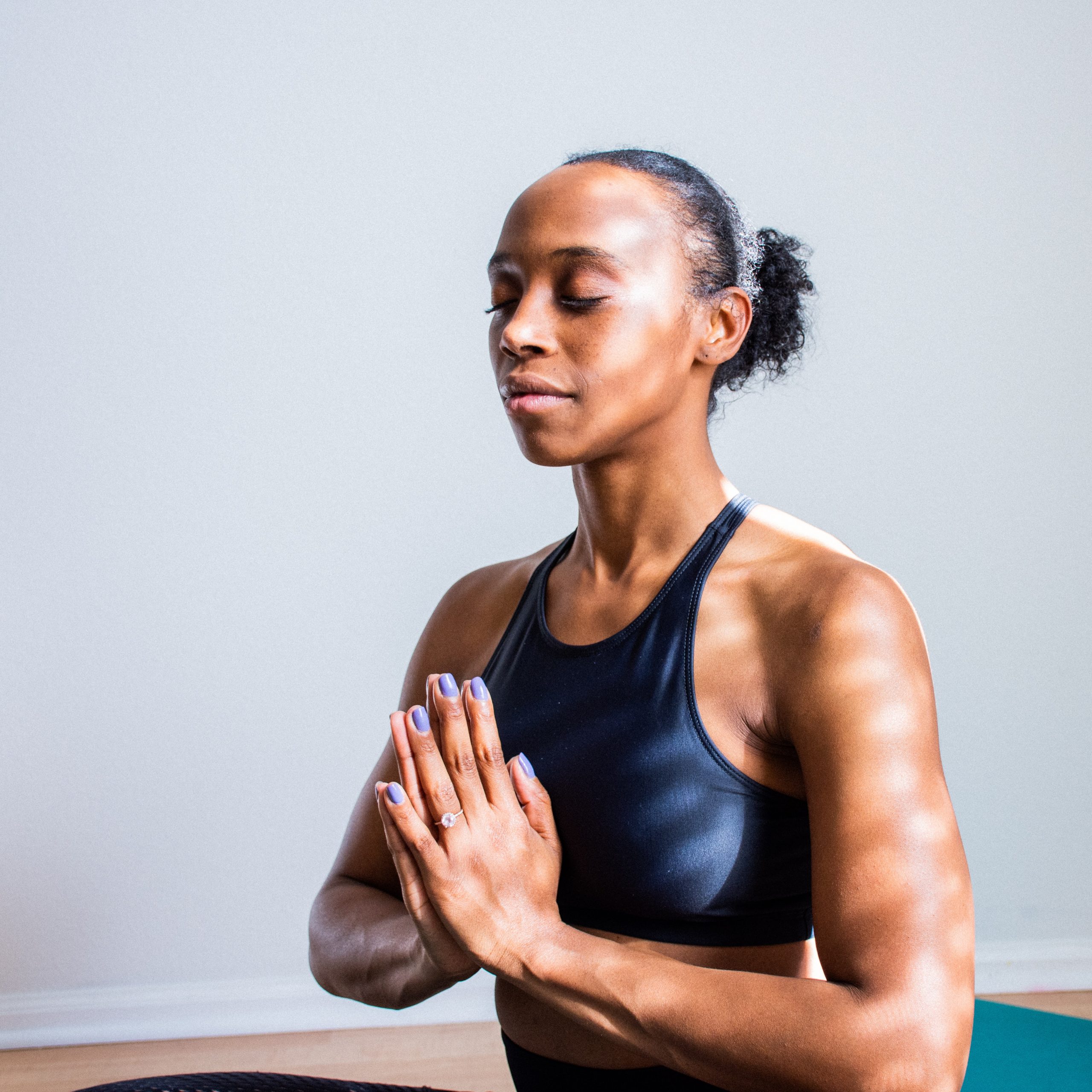 COVID-19 has led to a crisis of anxiety and PTSD and many people are experiencing difficulties in taking deep, relaxed breaths or they are experiencing extra sighing or “can’t catch their breath”. This is what we call disordered breathing and is the physical side of anxiety and PTSD. Disordered breathing and hyperventilation often goes unrecognized. Most symptoms of hyperventilation are not the typical rapid, shallow breathing that occurs during panic attacks. People who over breathe often complain of headaches, neck pain, jaw pain, leg and body cramps, and tension in the shoulder muscles. Posturally, such people may present with their jaws jutting out, as if gasping for air even as their shoulders slump forward. Unconscious attempts to restore posture by pulling the neck posteriorly, like a turtle pulling her head into her shell, results in a muscular “tug of war” in the neck and leads to chronic neck pain.

An effective practice for breath- and posture-related issues is the yoga “turtle” exercise, which reconditions and stimulates the neck muscles while one is breathing through the diaphragm.

This exercise can be done while standing or sitting. 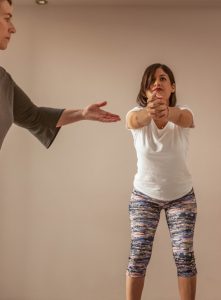 The postural changes that occur in hyperventilation syndrome (HVS) are as much emotional as they are physical, and we can often sense the oppression our clients feel by observing the patterns of their muscle contraction. Dysregulation of respiration may begin with birth trauma or can develop in response to chronic anxiety. Abuse affects posture and posture affects breathing. Women (more commonly than men) experience thoracic outlet syndrome, which may derive from physical trauma, such as a car accident; an athletic injury, such as triceps pushups; or repetitive trauma due to computer work that strains ergonomics and thus postures.

However, a number of sexually abused women I have worked with reported thoracic outlet syndrome as a part of a matrix of chronic pain, anxiety/breath/ upper chest, and neurovascular compression. The thoracic outlet (it is really an inlet) is an area at the top of the rib cage, between the neck and the chest. Contraction along this pathway leads to compression of the brachial plexus (the heart or fourth chakra) and subclavian artery. Many of these women report the experience of unwanted attention or abuse related to their breasts. Chronic scalene muscle tension in the neck, which co-occurs with associated breathing dysregulation (and asthma), exacerbates this syndrome. In hyperventilation, the neck muscles are often overdeveloped because they do most of the work, leading to chronic neck pain. The scalenes, through which the brachial nerve bundles pass, are often contracted from this overuse. Certainly, many women have described receiving abusive attention to their breasts as children and have therefore undergone breast surgery. Many of these women also experience body dysmorphic disorder, which involves a preoccupation to the point of impairment with imagined or slight defects in appearance, resulting in surgeries that bring no relief (Didie et al., 2006). All of this occurs within the respiratory matrix of muscle and memory. In his analysis of the whiplash model of pain, Scaer (2011) suggests, I believe correctly, that the chronic pain syndrome often resulting from mild motor vehicle accidents does not correspond with the actual events—that it more likely represents dissociated memory that was laid down at the time of impact due to intense fear (Scaer, 2011).

With chronic hyperventilation or over-breathing comes brain hypoxia, which in turn contributes to depression and headaches. The occurrence of over-breathing, or HVS, is estimated in the general population at 10% and likely more, for it is often undiagnosed. Like dissociation, hyperventilation can be difficult to detect because, without the symptoms of a full-blown panic attack, the signs are often subtle. While the client is often aware of symptoms such as chest tightness, tingling, or excessive yawning or gasping for breath at times, he or she usually does not understand dysregulated patterns or why they occur. Overbreathing may develop as a conditioned fear response that occurs first at the time of trauma or it may occur later in life—for example, in latent PTSD. Asthma and PTSD are highly associated (Goodwin, Fischer, & Goldberg, 2007), and over-breathing commonly co-occurs with asthma, chronic bronchitis, and chronic laryngitis; indeed, these may be symptoms for many years before the causes are identified. Hyperventilation can occur without anxiety and anxiety can be caused by hyperventilation. In its chronic form, it is a conditioned behavior that responds to guided deconditioning, breathing retraining, and nutrition.

Try this breathing exercise and let me know what you think. Looking for more information on disordered breathing trauma and PTSD? Explore my book Rhythms of Recovery: Trauma, Nature, and the Body.

The workshop experience with you was enormously stimulating, meaningful and applicable. Many of the approaches you designed are out there in my patients’ lives helping them in meaningful ways. Thank you for your intelligence, humor and dedication.