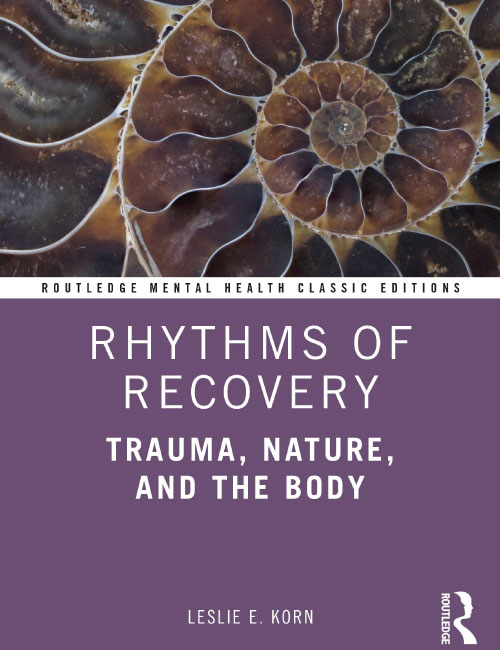 As a psychologist and dance movement therapist, I am happy to see Leslie Korn’s book Rhythms of Recovery: Trauma, Nature, and the Body, appropriate for people who have experienced trauma as well as for therapists working with trauma victims. Most books on trauma are one-dimensional; they may deal with emotions and cognitions but leave out consideration of the body. Or they may deal with the body but leave out consideration of the environment around the body or omit a broad cultural context. Korn’s book manages to integrate psyche, soma, and spirit as well as nature, physiology, and culture through the theme of rhythm.

The classic edition of Rhythms of Recovery sheds light on rhythm, one of the most important components of our survival and well-being. It governs the patterns of our sleep and respiration and is profoundly tied to our relationships with friends and family. But what happens when these rhythms are disrupted by traumatic events? Can balance be restored, and if so, how? What insights do eastern, natural, and modern western healing traditions have to offer, and how can practitioners put these lessons to use? Is it possible to do this in a way that’s culturally sensitive, multidisciplinary, and grounded in research?

Rhythms of Recovery examines and answers these questions and provides clinicians with effective, time-tested tools for alleviating the destabilizing effects of traumatic events. It also explores integrative medicine, East/West medicine, herbal medicine, psychedelic medicine, complex trauma, yoga, and somatic and feminist therapies. For practitioners and students interested in integrating the insights of complementary/alternative medicine and 21st-century science, this deeply appealing book is an ideal guide.

Read an excerpt from my new preface

“The origins of this book and the clinical vignettes I explore began during my clinical fellowship in psychology and religion at Harvard Medical School in the department of psychiatry in 1985. I had been in clinical practice for ten years, practicing bodywork and natural medicine to treat physical and emotional trauma while living in the jungle of Mexico. I entered the program because I wanted to understand more deeply how to respond to stories my patients were telling me in response to my touch on their body -memories of pain and distress.

In the mid 80’s even as there were vestiges of Reichian and Gestalt therapies lurking in the hallowed corridors of Harvard, the idea of bringing the body into treatment, to speak the language of the body, and gently touch the body, was quite simply, heretical in a profession that was by-and-large still mired in the “distancing” required by psychoanalytic/psychodynamic theory and the mythical complex of Oedipus.

As I worked with my patients–those whom our profession often stigmatizes as “difficult and dangerous,” the so-called borderline or suicidal patient–I listened to them with my hands, and mind. I did so as they traversed their bodily terrain of dissociated pain and found their inner rhythms that had long ago been thrown off their axis by traumatic events.

In the ‘80s and even into the ‘90s, Mindfulness meditation (Vipassana) was still nascent and closeted in the conventional mental health arena, and even referrals to 12-step programs were not the norm. The application of nutrition for mental health, called Orthomolecular medicine (the use of micronutrients for brain/mind health), had been around since the 50’s yet the use of nutrition for the brain was considered (and still is, in some circles) the province of a few eccentrics.

During the 80s, we entered an important conceptual crossroads in the treatment of trauma. Dr. Judith Herman had published Father-Daughter Incest, the pioneering work that helped, yet again, to clear the fog of social dissociation and denial that surrounded the reality about the prevalence and damage caused by family sexual violence. At the same time, Dr. John Wilson navigated cultural boundaries by collaborating with Native communities and introducing greater numbers of war veterans to the Lakota healing ritual of the sweat lodge, thus bringing an ancient restorative ritual to the repertoire of post-war healing.

After my fellowship, I continued with my private practice in Boston. The late 80’s brought a new reckoning-the ubiquity of sexual abuse and mind control by (predominantly male) therapists, psychiatrists, gurus, and clergy. As I contend in this book, there is a profound relationship between patients’ sexual and mental abuse and the patriarchal fear of the (women’s) body and the taboo on therapeutic touch…”

As a psychologist and dance movement therapist, I am happy to see Leslie Korn’s book Rhythms of Recovery: Trauma, Nature, and the Body, appropriate for people who have experienced trauma as well as for therapists working with trauma victims. Most books on trauma are one-dimensional; they may deal with emotions and cognitions but leave out consideration of the body. Or they may deal with the body but leave out consideration of the environment around the body or omit a broad cultural context. Korn’s book manages to integrate psyche, soma, and spirit as well as nature, physiology, and culture through the theme of rhythm.

All emotional disorders are the result of trauma, mostly from in utero through the first seven years of life. The modern uncivilized practices of unlimited wars and repeated forceful immersion of soldiers in barbarian trauma have produced an epidemic of PTSD. Rhythms of Recovery offers a road out of the insanity.

The longer we study the effects of traumatization, the more we see the impact on the body. Leslie Korn shows us how the body operates rhythmically, how trauma disrupts that rhythmic functioning, and most importantly, how a plethora of new (and old) methods can be used to help the body restore its balance. This book is a must-read for every therapist who deals with trauma.

- Leon Chaitow, DO, Journal of Bodywork and Movement Therapies
Back to books
Ready to take control of your health? Schedule an Appointment